The debate over the nature of the current wave of inflation is far from over. This year, as the global economy recovered from the recession triggered by last year’s pandemic, inflation continued to exceed expectations. The prices of raw materials, consumer goods and housing have increased, to varying degrees, in both the United States and the euro area, reversing a multi-year trend of low inflation. Is this a transitory phenomenon or a sign of regime change, and how can institutional portfolios be adjusted accordingly?

It will be some time before the answer to this question becomes clear. Meanwhile, investors have started to take inflation seriously.

Edith Siermann, Head of Fixed Income and Specialized Fixed Income Solutions at NN Investment Partners, says: “For the first time in many years, there is a clear possibility that inflation in the euro area will be considerably higher over the next 10 years than it was over the past decade. This is not currently our main point of view, but it has certainly become a possibility. “

For this reason, Siermann sees long-term inflation as a potential driver of portfolio allocation in the years to come. However, the company expects eurozone rates to remain low and country and credit spreads to remain tight.

“European bond markets will continue to be dominated by the monetary policy of the European Central Bank. Our view on ECB policy will therefore be another important driver of portfolio allocation. Without unanticipated crises, we expect volatility to be low. We do not currently anticipate any significant strategic changes in our fixed income portfolios, ”she said.

GIAM: new sources of diversification
Bruno Servant, CEO of Generali Insurance Asset Management (GIAM), expects headline inflation in the euro area to be 1.9% in 2021 and 1.4% in 2022, well below target of the ECB. “It is a real headache for the ECB, which has just unveiled a more accommodating forward guidance,” said Servant.

For liability-oriented investors such as GIAM clients, the duration gap remains a major concern. As such, the priority remains to find new sources of diversification.

Servant says, “Solving the challenge under the capital requirements will become more difficult. In particular, current strained valuations and historically low real yields will reduce the benefits of equity-bond diversification going forward. Liability-focused portfolios will need to understand and integrate more currency risk, more credit exposures across different levels of rating and seniority. Adding more private assets would also improve their profile. This broader and more flexible risk allocation, within the framework of regulatory capital, will be decisive in the years to come. “

However, in the event that inflation becomes a more pressing issue, Servant advises tackling it with a diversified approach.

He says, “We are looking at a mix of inflation-protected government bonds, high yield bonds and equities. While linkers offer direct inflation compensation, they are also exposed to rising real yields, so we like to add a selection of high yield issuers that have lower responsiveness to yields. On top of that, there are equity sectors that are positively correlated with inflationary pressures, either directly or indirectly, including chemicals, banking, oil and gas, and small caps in general. Real assets also tend to offer good inflation hedging characteristics.

Investors would appreciate definitive evidence supporting one side or the other of the debate. But the lack of clarity on the current situation forces them to keep an open mind about the short term and to focus firmly on the long term drivers of portfolio allocation.

APG: three mega trends
At Dutch pension asset manager APG, the recent rise in inflation, after decades of unusually low price growth, has forced a rethinking of the modeling approach. APG’s chief economist, Thijs Knaap, said: “Over the past 30 years, there have been no significant inflationary shocks. For this reason, when evaluating the performance of assets in an inflationary environment, stochastic modeling provides unreliable results. Over the past year, we’ve added a number of deterministic scenarios.

For example, the establishment assessed the performance of different asset classes in the event of a shock that would trigger a stagflation scenario. Knaap says, “Think of a scenario in which climate change causes a productivity or cost shock, due to the effects of floods, fires, or carbon emissions taxes.

“There is another hypothetical scenario where the turmoil in the eurozone causes the ECB to lose control of monetary policy. This is a scenario where the debt is too large to handle and high inflation causes significant problems. “

In both scenarios, says Knaap, the only asset classes that perform well are index bonds and commodities. “You’d think real assets would perform well in an inflationary environment, but that doesn’t appear to be the case. Real estate, for example, would benefit from higher income streams, but valuations would fall. “

Building the portfolio on the basis of these results is arguably difficult. Furthermore, Knaap tends to agree with those who see inflation returning to the level of the last decade in the United States and Europe.

There are three “mega-trends” that Knaap considers significant for the APG portfolio. One is climate change, which already determines most of the institution’s investment decisions. The legacy of COVID-19 and tensions between the United States and China are the other two, but these are more difficult to translate into portfolio allocations, due to their unpredictable nature.

“Nevertheless,” says Knaap, “we have to take inflation into account, because of the long-term horizon of our investments. Our clients have historically viewed inflation as a significant risk and have limited their exposure to it because of the damage it can cause to pension benefits. ”

“The signs point to a more pronounced global reflation phenomenon. But this is temporary, in our view, and our model suggests that US inflation will return to slightly below 2% in the medium term. That is, unless the US economy undergoes a structural change, ”he said. 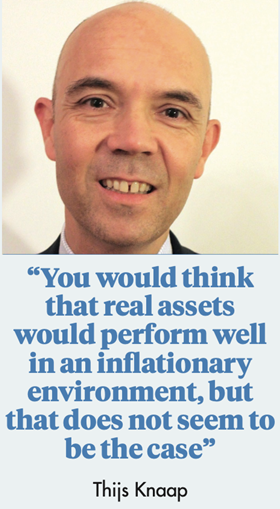 He says, “If we saw further advances in automation within the industry, we could see an acceleration in economic growth. Likewise, a significant investment in green infrastructure, as announced by the US government, would be conducive to growth. And if governments resist the temptation to curb globalization, growth would benefit. If these three trends were to push in the same direction, it would increase our trend-growth assumption. But we would need to see stronger signs of this. ”

Stronger growth over the next few years is almost a given, thanks to the huge fiscal and monetary stimulus that are being implemented to tackle the consequences of COVID-19, Svedberg said. But in his opinion, the long-term picture is not that different from the world before COVID. 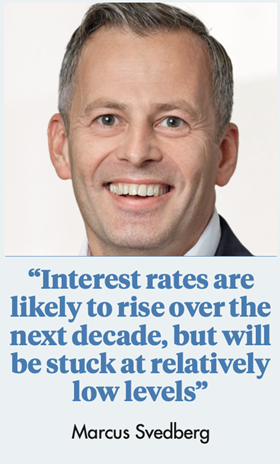 “Perhaps surprisingly, when we put on our 10-year-old glasses, we come to a very similar conclusion to what we had before the pandemic. Interest rates are likely to rise over the next decade, but will remain stuck at relatively low levels, and the global economy is not growing as fast. This means we need to realistically adjust our assumptions about financial market returns, ”Svedberg said.

He argues that yields will be lower in the future, despite the excellent results of recent years.

“Whatever one assumes is the neutral interest rate, and I notice different people using very different assumptions, it’s extraordinarily low, both for Europe and the US. That means that the returns of a blended portfolio will be quite low historically, ”says Svedberg.

“However, in this scenario of low growth and relatively low rates, you are still rewarded for taking risk, so stocks are a preferred asset class, although they are already expensive. As an investor, we are also very active in real assets, we are certainly not alone.

The priority over the next decade will be to find value within equity portfolios and real assets and the sources of value could change rapidly over time. “It’s going to be a chore,” he said. 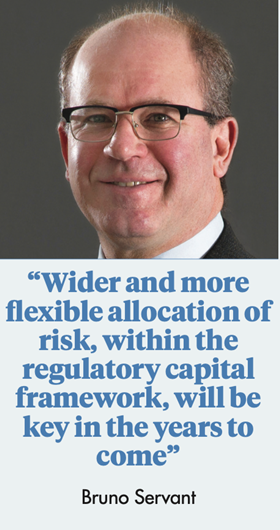 A series of fundamental macroeconomic questions should never be put aside, according to Svedgberg.

He says, “What will central banks do with their huge balance sheets?” Market participants shouldn’t be surprised to see the Federal Reserve start to shrink and eventually shrink its balance sheet, slowly or quickly, depending on how fast the economy grows.

“But what if central banks don’t have the time or the will, for whatever reason, to shrink balance sheets?” Assuming that interest rates rise to some extent, then we end up with a key question of what debt / GDP levels are sustainable. “